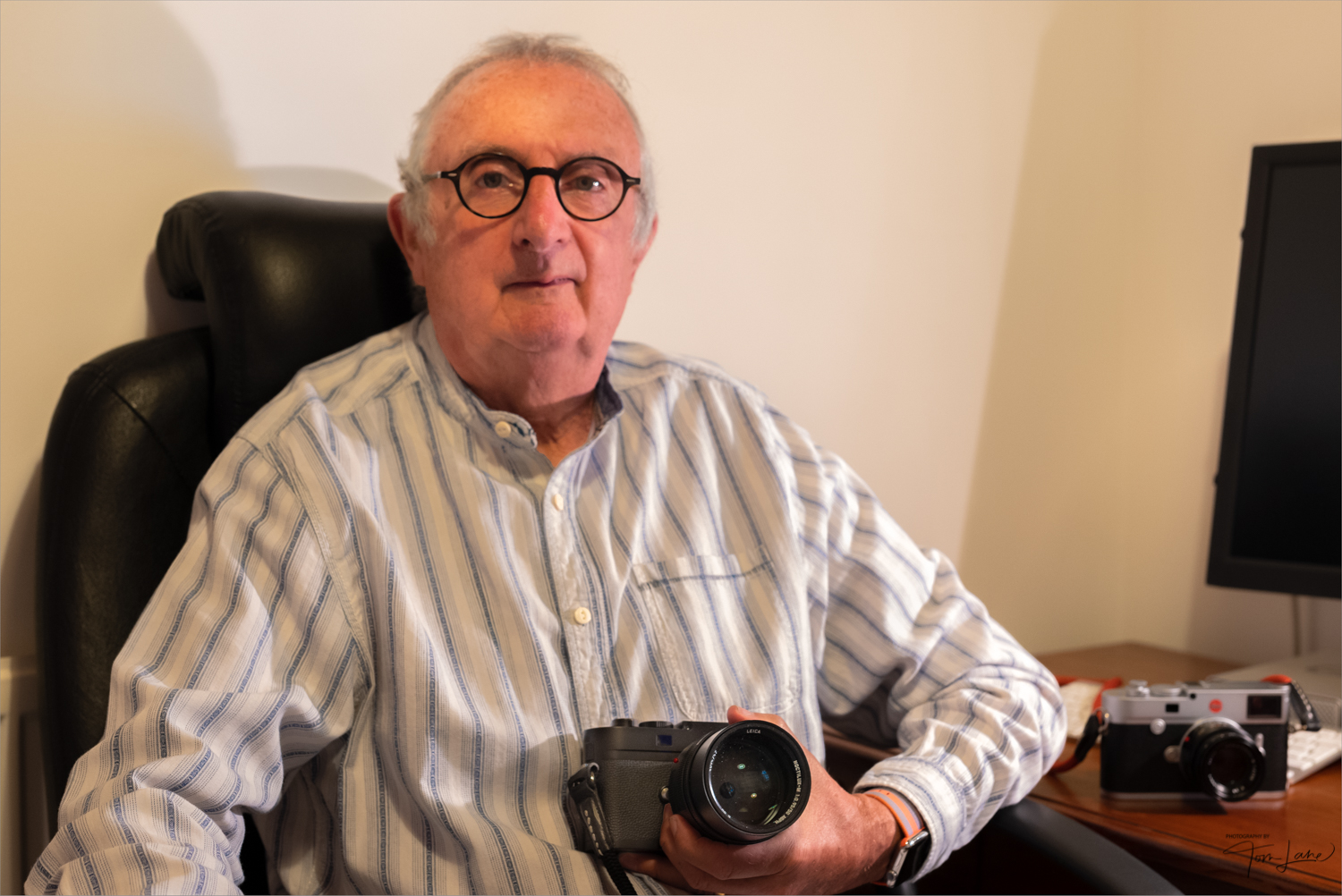 Born in Leigh, a small industrial town situated in the Northwest of the England, this “lad” became interested in photography when he bought a camera during a school trip to Belgium, around 1962. I cannot remember the brand, but it was made in Germany, had a fixed lens with focusing and aperture rings, plus a depth of field scale, so it did give me a good grounding in the basics. The only problem was that I couldn’t afford to have the 120 (6×6) film developed and so quickly had to learn the process. I remember loading the developing tank under the bedclothes, changing the spare room light to red and making sure no-one turned on the landing or bedroom lights whilst I made a contact print of the twelve images.

In 1966, whilst doing a graduate apprenticeship with English Electric, I was chosen for Voluntary Service Overseas and on the 22 October boarded a BOAC VC10 (now British Airways) for a flight to Amman, in Jordan; where I was to spend one year with Save The Children Fund looking after their fleet of Land Rovers which were used to provide medical support to the Bedouin living in the desert. Before leaving for this adventure, I bought a Yashica  35mm rangefinder camera so that I could take Kodachrome slides. This period really increased my interest in photography to a new level, as we had a clinic in Petra and used to do a five day trip into Wadi Rum to support the nomad camps, all of which provided wonderful photographic opportunities.

During my time in Jordan I bought a Yashica-Mat twin lens reflex camera (Japanese Rollieflex) and hence my love of Black & White photography was born.

I’ve always been keen on Motorsport and after returning from Jordan spent the next couple of years trying, with very limited success, to capture fast moving cars and motorbikes. Around 1969 a friend of mine sold me a screw thread Leica camera which started a relationship which has lasted up to the present time. Using the Leica, I appreciated its quality and after a year or so upgraded it to a “double-wind” M3.

I worked in Engineering and in 1975 the company advertised a position in Zambia. With great ideas of coming a famous Wildlife Photographer, the family, together with recently purchased Nikkormat and Nikon F bodies, plus a bunch of Nikkor lenses boarded a flight to Ndola, via Rome and Lusaka. Although I did do some wildlife photography, it took a backseat to the Tennis and Social Life and I spent the rest of my working life in Engineering. In retrospect I’m pleased things didn’t work out, as I enjoy photography as hobby rather than something I had to do.

After the two year African experience we had the travel bug and in 1984 left the UK again, to spend five years in Dubai. Dubai in those days was nothing like it is now; to me it was the biggest playground in the world and I had a fabulous time riding motocross bikes, diving, “dune bashing” (driving 4-wheel drive vehicles in the desert) and of course taking photographs. Things were cheap there and so the two Nikons were upgraded to an F3 and FE (One for colour and the other for monochrome). When we left Dubai I sold the Motorcross bikes and bought a Hasselblad 503x and a couple of lenses which I really enjoyed using. A couple of years later, when digital imagery started to be introduced I thought a digital back for the Hasselblad would be a cheap way to go, I couldn’t have been more wrong, with that particular piece of kit being just short of £20,000. Needless to say, I’m still using film backs on the 503.

Just over two years after returning from Dubai, an opportunity to work in Singapore arose and so we packed up again and moved to Asia in December of 1991. My work involved providing production equipment (autoclaves for curing composite structures, for example aircraft wings) for the aerospace industry and I was fortunate to travel extensively from New Zealand in the south, to Japan in the north. Japan was gearing up to become a heavy player in aviation (including building the wing for Boeing’s 787) and I made many trips there. Whilst in Dubai I had bought a Minolta CLE camera, which had been developed with Leica, who simply called it the CL and it was on one of these trips, whilst in Tokyo, that I traded it for a new Leica M6 with a 50mm Summicron lens. On another trip to Tokyo I also bought a secondhand M6 so that I could shoot in colour and monochrome.

Although I preferred Dubai, we spent seven happy years in Singapore. I don’t think I could have stayed there so long if I didn’t have to travel at least once or twice a month. Singapore was safe, small, crowded, had wonderful food and everything was pristine and worked; in fact it was so perfect it was almost like living in Disney Land. However, I felt I had to get out into the real world on a regular bases.

In 1998, whilst in China, I met an American who was to become a great friend. He had developed a system for repairing the aircraft structures; whereas I had been involved with the manufacture. From a technical point of view I was fascinated with the repair of the latest generation aircraft and he offered me a position to run the UK division, of his Seattle based company. Our son, who had just graduated from university never enjoyed coming to Singapore three times a year for his holidays and so we thought he isn’t going to want to come when he starts work and only has one holiday a year. Therefore, after seven years we decided to move back to “Blighty”.

I retired in 2019, at the age of seventy one, having spent the last 21 years traveling the world, involved with aircraft maintenance. I’ve always taken a camera with me and have been extremely fortunate to have had the opportunity to photograph some wonderful locations during the weekends, or free time in the evenings.

Equipment wise, I moved to digital when Nikon introduced their D2x and I got a cheap deal on a “new old stock” D1x. I loved digital from the word “go” as I didn’t have to mix chemicals and spend hours in a darkroom; I could now spend five minutes, or five hours on the computer and didn’t have to clear up afterwards. Producing colour prints didn’t really present any problems. However, I couldn’t get a black & white print which satisfied me and so kept the darkroom for another year, or two. With the development of software, printers and inks I’m now happily producing both colour and B&W prints digitally.

Leica introduced their M8 digital camera in 2006 and so I sold the two M6’s and invested in it. I’ve stayed with Leica’s technology and upgraded to the M9, M240 and more recently the M10.  Loving Black & White photography I couldn’t resist when Leica produced their “Monochrom” camera which has a sensor only able to record shades of grey. I do like Leica cameras, as in my opinion, the build quality is better than anything else I’ve seen, the lenses are superb and they have always produced results which have far exceeded my expectations.

Again in my opinion, no one camera is capable of covering all photographic situations and therefore for safari work and motorsport I keep a couple of Nikon bodies (D810 & D800) which together with a 600mm f4 and 300mm f2.8 make a great combination.

There are many great places in the world I would still like to photograph and hopefully I’ll get chance to visit some of them during my retirement and share my images with you.